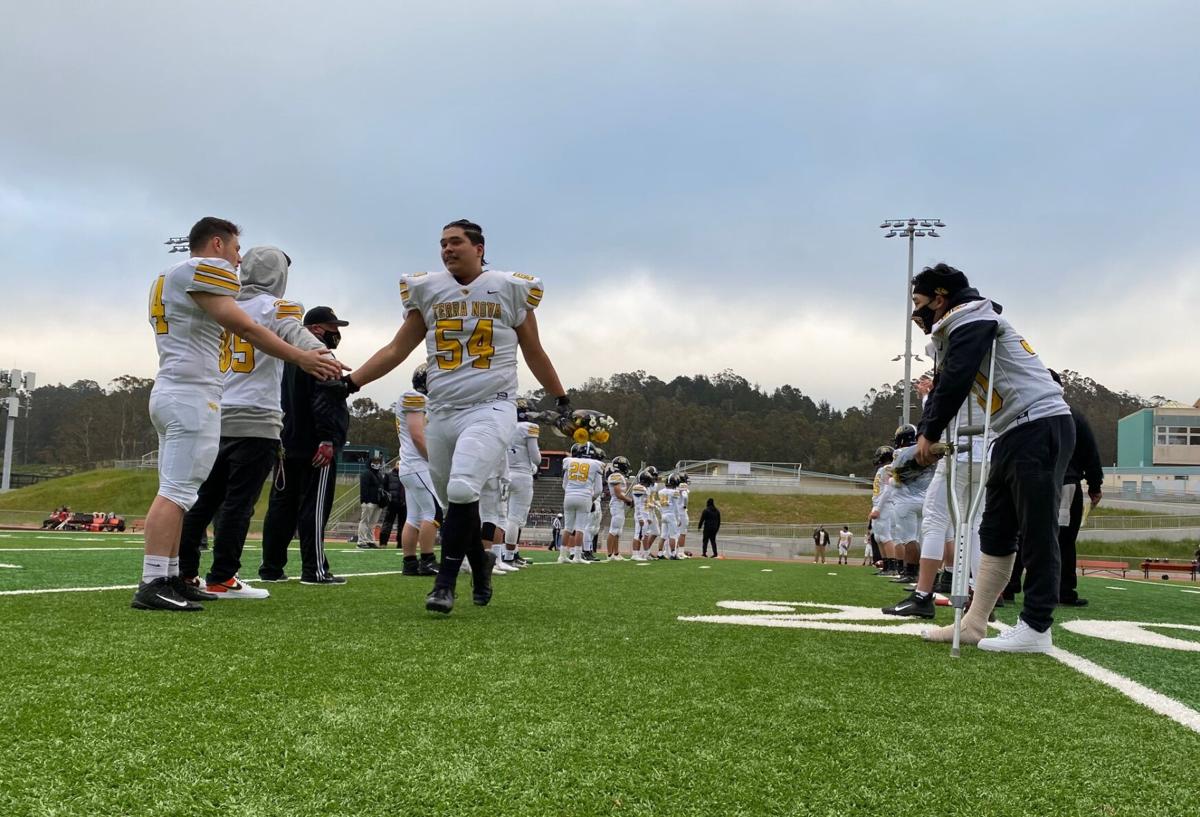 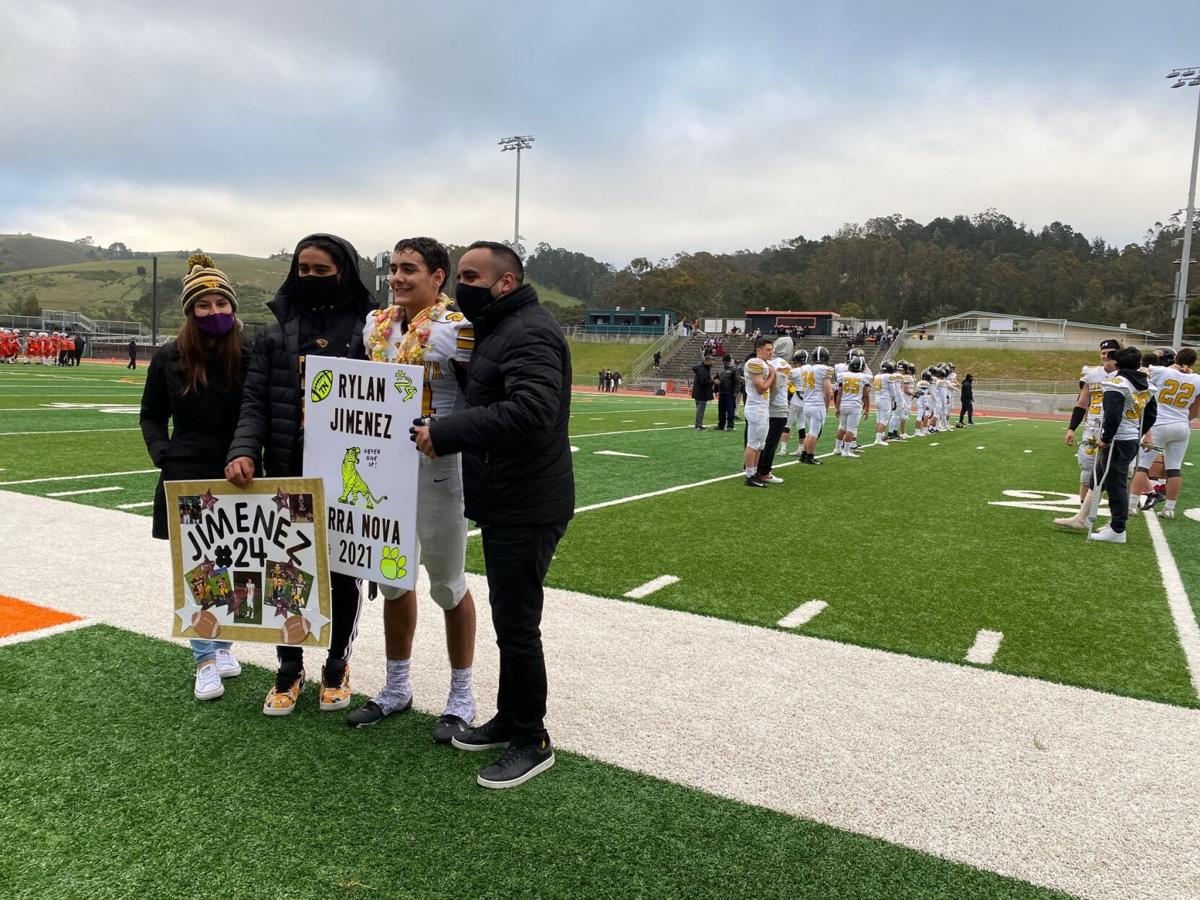 Players were allowed to invite four members from their households to the game on Friday. Clay Lambert / Tribune 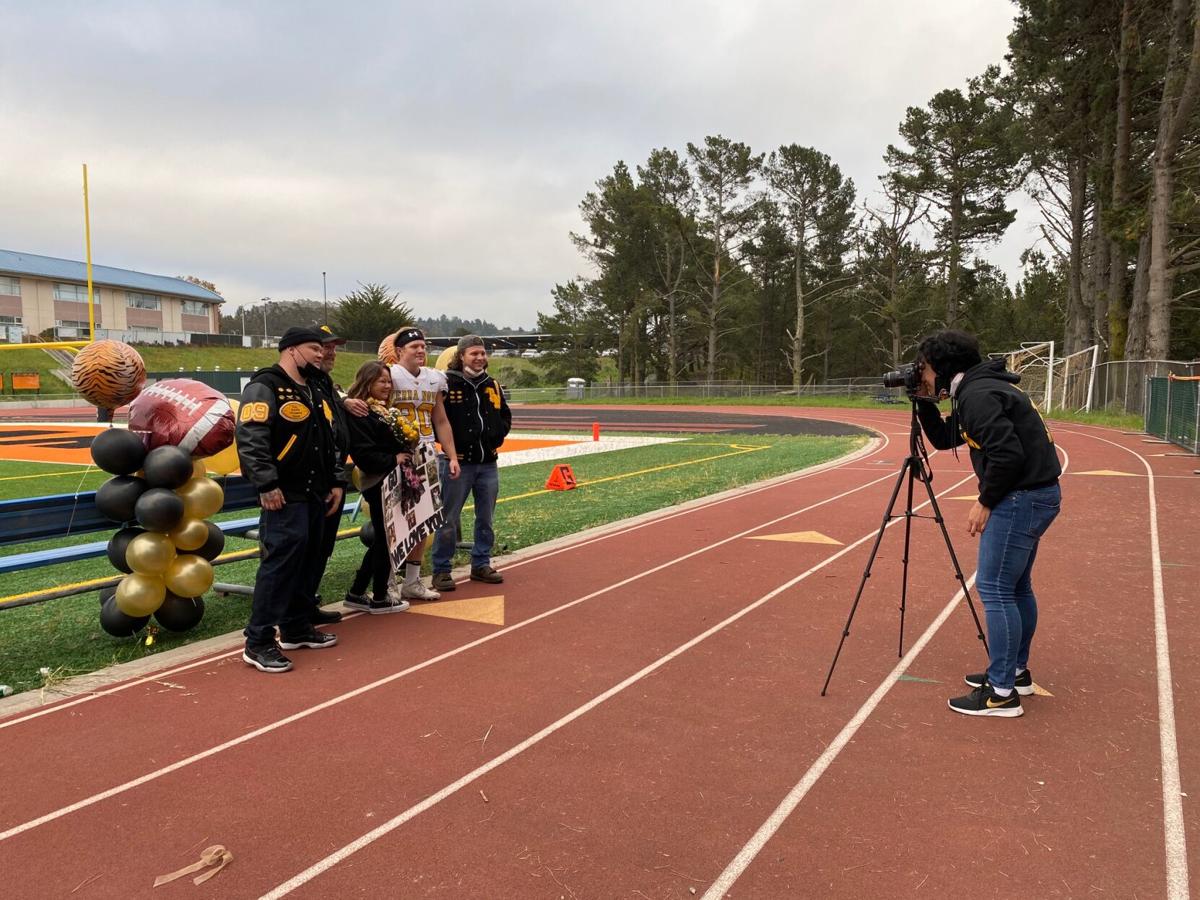 Families posed with their players one final time on the gridiron. Clay Lambert / Tribune

Players were allowed to invite four members from their households to the game on Friday. Clay Lambert / Tribune

Families posed with their players one final time on the gridiron. Clay Lambert / Tribune

The Terra Nova High School Tigers fell to their rivals to the south, 42-12, on Friday night but the third and final game of the season nonetheless carried a celebratory feel.

The Tigers and a small, but loud, group of supporters fought to the end — forcing a late turnover that quickly became six points. And they honored their seniors in an unusual ceremony on the Half Moon Bay High School field.

The daunting 2020-21 season seems over before it started. Three games ended in three losses for the Tigers but that does not describe the effort that began long before anyone strapped on the pads in a pandemic-shortened season. Players and coaches endured a long wait before they could practice. They were tested for COVID-19, their temperatures taken every time they turned around. They did their part to assure teammates were as safe as possible in a season they will never forget.

They got off to a rough start on Friday. The Half Moon Bay Cougars’ offense got the first crack at the ball and they made the Tigers pay. The Cougars amassed four first downs rushing in the game’s first five plays from scrimmage. Half Moon Bay senior Tristan Hofmann bulled in from the 1-yard line for his first touchdown of the night.

The Tigers’ next drive stalled at midfield and a shanked punt gave Half Moon Bay the ball in good field position. But the Tigers’ defense stiffened. They forced a fumble recovered by Terra Nova senior Luke Avery.

Back and forth the two teams went, with the “skull” trophy hanging in the balance. The Cougars scored next in the second quarter on a William Moffitt keeper.

Down 14-0, the Tigers responded midway through the second quarter. Tiger Nathaniel Bendo made the play of the game with just over five minutes left in the half. From his wideout position, he swung out to the left and made a circus catch between two defenders and then outran the Cougar defense for a 60-yard touchdown. So, it was 14-6 at the half.

Connor Quosig broke two long runs in the Cougars’ opening drive and the Tigers got the ball back down 21-6. A fumbled punt attempt gave Half Moon Bay another opportunity and they capitalized to make it 28-6.

The Tigers got their last score of the game with 3:50 remaining when they forced a fumble at the Half Moon Bay 25-yardline. Then Dimitri Fabiani-Wyatt, who was a workhorse all game, followed his tackle into the end zone for a 6-yard score.