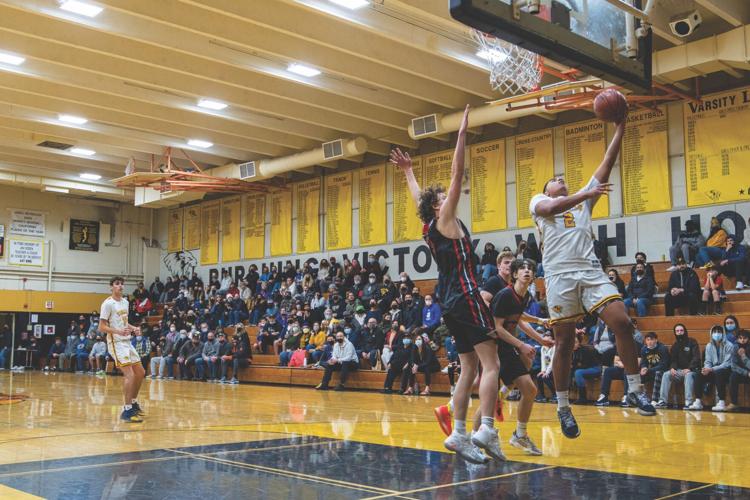 Dominic Tuiasosopo scores on a layup during Terra Nova’s 71-63 loss to visiting San Lorenzo Valley on Feb. 22. The loss ends the season for the Tigers. 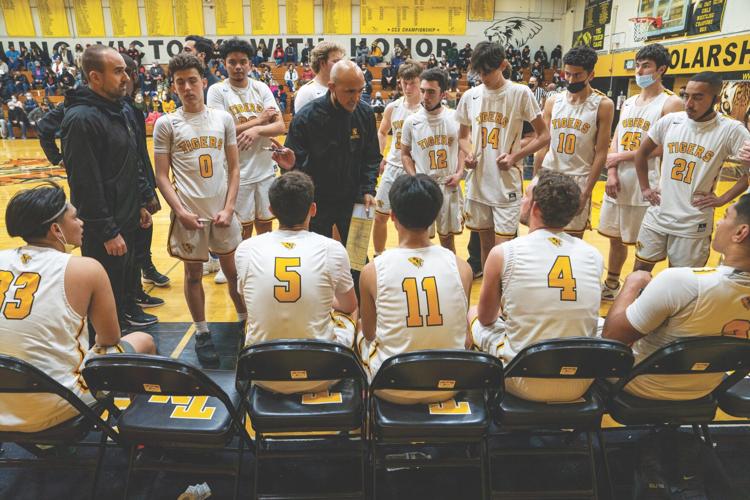 Coach Robby Wierzba gathers his players during a timeout in the CCS playoff contest at Terra Nova.

“A lot of credit to San Lorenzo Valley,” said Terra Nova head coach Robby Wierzba. “They made a lot of tough shots. I’m not mad at my guys, they played some really tough defense and made some big threes.”

The Tigers trailed just behind the San Lorenzo Valley Cougars in the beginning minutes of the first quarter, never down by more than three points. The home team took its first lead of the game at 11-9, with just under two minutes to go in the first. The Cougars responded with an 8-0 scoring run, only disrupted in the final seconds by a free throw by Jermaine Camasura. Terra Nova finished the quarter down 17-12.

“(San Lorenzo Valley) was tough, as tough as us,” Wierzba said. “It just came down to shot making, and they made more shots.”

The coach also said that free throws hurt the team. San Lorenzo Valley made close to 90 percent of its free throws, while Terra Nova finished at about 50 percent.

“That was a major key of the game,” he said.

Terra Nova came out hot in the second quarter, hitting six points in a row and reclaiming the lead, 20-19. At halftime, the scoreboard had turned again and the Cougars held a slim 32-29 advantage.

Anthony Wierzba and Dominic Tuiasosopo led the offensive performance in the first half, driving through the defense to find the basket and getting good looks beyond the arc.

In the third quarter, San Lorenzo Valley stretched its lead, but Terra Nova was nowhere near

giving up. Camasura again disrupted a long Cougars scoring streak with a 3-point shot and Tuiasosopo hit a shot within the paint to finish up the third quarter down just 51-45.

In the final quarter, seniors Tuiasosopo and Gio Thompson, were relentless, trying to catch up and win to play another game.

As the final seconds trickled out, the boys hung their heads, but Wierzba told them to keep their chins up.

Wierzba. “I love them so much. They do whatever it takes to

win. It just wasn’t in the cards tonight.”

The game marked the end of his first season with the Tigers.

“It has been the best experience of my life, and I’m looking forward to growing the program a lot more,” said Wierzba.