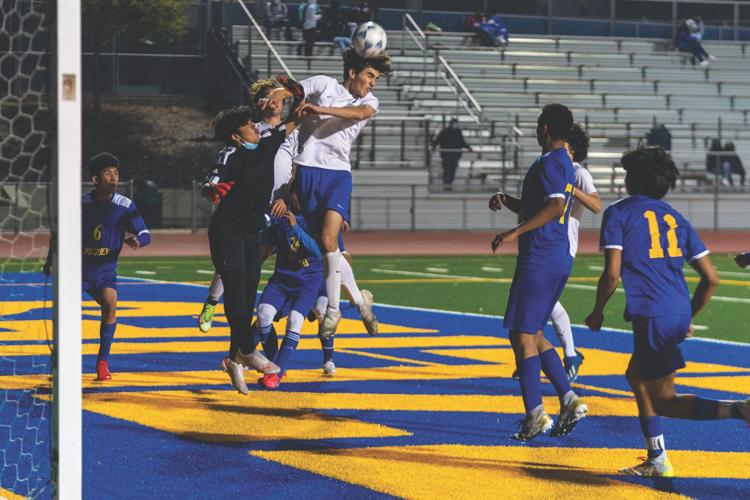 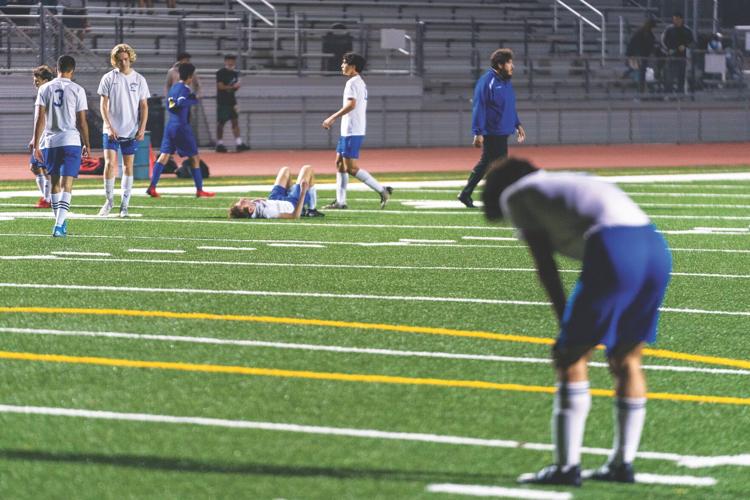 Members of the Oceana soccer team took last week’s loss to Jefferson hard. It dealt a blow to the team’s playoff aspirations.

“We’ve been playing with each other for so long and this is our last year to get somewhere,” said Mateo Pierz.

For the seniors, this is their last chance to earn a seat in the Central Coastal Section tournament, and the Jan. 26 loss to undefeated Jefferson all but dashes the team's hopes of an appearance as only the first- place finisher in the division earns a spot.

“Every game is an important game and tensions are high because we know that we’re not playing the way we should be,” said Oceana senior Brian Sansot. “We have high expectations of ourselves as a team, especially this season. We should be playing better from beginning to end, and we recognize that this was not the result we should have.”

The Grizzlies found their offensive footing right off the bat, scoring five goals in the first half. Oceana forward Victor Lino scored once, but the Sharks were in a big hole at the half.

While it looked to be a lopsided matchup, the Sharks found their rhythm at the start of the second half.

“They settled in a little bit more in the second half,” said Oceana head coach Eric Cabrera. “In the first half, they came in a little too overly confident. But in the second half, they realized that the game of soccer doesn’t change for anybody. It doesn't matter what school you’re at, what team you are on. They realized that they had to go back to their style of play and way of moving the ball.”

The coach added that he thinks, in the first half, the team wasn’t really present, but, in the second, players zeroed in.

“We were moving the ball a lot more, talking more, helping each other out,” said Cabrera. “The second half is definitely the style of play that we usually start with.”

Early in the second half, Brandon Cunningham found the back of the net with a header from a corner kick and assist from Mateo Pierz.

The second goal for the Sharks led to a strong offensive push for the boys. Minutes later, Sansot shot from the top of the goalie box, dove for his missed shot and shot again to score from a kneeling position, pulling the score to 5-3.

With the fourth goal, a shot from center by Owen Gibson, the energy of the game changed as Oceana found itself only one goal behind Jefferson, 5-4.

“We need to play every game like we did in the second half,” said Gibson.

The team pushed the ball and got several good shots off in the final minutes of the game, but failed to pull through with a tie.

“There was a bit of laziness,” said Pierz.

The team hadn’t competed in almost two weeks prior to the Jefferson game, so Pierz said it took players some time to get warmed up.

“When only one team from our division goes to the playoffs, we realized we can’t just lay down at 5-1 and quit,” he said. “We need to try and pull something out. We tried our best, but we just came up short.”

After the game, Cabrera encouraged the team saying, “It’s too early to give up.”

“We just need to put all this

behind us,” said Pierz. “We need to put every loss and game behind us and stop worrying about

what happened the game before, and just move on and play hard every time.”

Oceana players picked themselves up to secure a 2-0 victory over El Camino High School on Friday.

“(The seniors) want to go out with a bang,” said Cabrera. “This group of boys is hungry. They want to leave their mark at Oceana High School and in Pacifica … We still have a shot at the postseason, so I’m excited to see the rest of the season.”