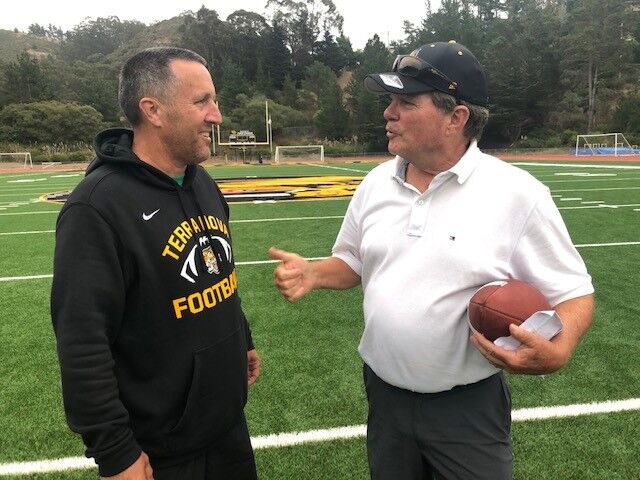 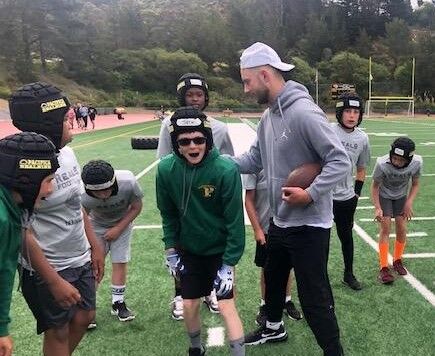 Anthony Gordon, who recently signed to play for the Kansas City Chiefs, gives some words of encouragement to youths at the PacificaTigers football camp. Photo courtesy Horace Hinshaw

Anthony Gordon, who recently signed to play for the Kansas City Chiefs, gives some words of encouragement to youths at the PacificaTigers football camp. Photo courtesy Horace Hinshaw

Two years ago, George Rush, former City College of San Francisco championship football coach, introduced a new concept to the game of football, focusing mainly on having fun and safety protocols. He called it “Realnine football.”

“I took ideas from here and there to formulate this game, but I wanted it to be safe. Parents want their children to play football, but do it safely and learn the game,” said Rush, who retired from City College in 2014.

Rush found retirement was not for him, so when Terra Nova High School varsity coach Jason Piccolotti invited him to join his coaching staff two years ago, he jumped at the chance. At the same time, he was formulating his “Realnine” game into a reality.

“In 2019, we started with high school athletes and eight teams, but then COVID-19 shut us down last year,” said Rush. “My goal is (to) get young(er) age kids playing football in a safe atmosphere. Many parents want their child to play football but are concerned about the health factors. In Realnine we teach them the proper way to play.”

Earlier this year, the Pacifica Tigersharks Pop Warner program shut down because of the lack of athletes. According to Tigersharks President Mike Biancalana, the main reason was head injury concerns.”

“There was a lot of publicity about head concussions,” said Biancalana. “Parents were seeing professional football players having health problems in their retirement years. They didn’t want their son getting hurt at an early age, which might affect him later in life.”

So, two weeks ago, Tigersharks teamed with Realnine Football to host a football camp for fifth- through eighth-graders at Terra Nova.

“The design of the game gives us the opportunity to teach football skills and game safety without tackling and head contact. It is a nine-man game that is played with the same rules and regulations of 11-man football while minimizing health risks,” said Rush. “All players are equipped with soft headgear and shoulder pads. The athletes are taught to use their hands, not their head, shoulders or forearm to tackle an opponent.”

Rush wants to develop two nine-man leagues with six teams of 12 players, one for fifth- and sixth-graders and the other for seventh- and eighth-graders. The teams would play an eight-week schedule with games at Terra Nova. The teams would practice on Thursday nights.

“After Labor Day, being that presently there is no local Pop Warner football program, we will work with the Tigersharks staff to start the leagues,” said Rush. “Every player would play at least a half. They get to play while learning the fundamentals of the game properly. If a kid makes a decision to play football when they get to high school, he will have the skill-set to know how to play the game to translate to tackle football.”

Anthony Gordon, home from the Kansas City Chiefs training camp, stopped by the camp to talk with the kids. In January, he joined Kansas City as a reserve/future signee.

“I’ve had a rewarding career,” said Gordon, whose goal is to make the Chiefs’ 53-man roster this year. His football career has taken him from championship years at Terra Nova and City College of San Francisco to his record-breaking season at Washington State University. He was signed by Seattle Sea-hawks as an undrafted player in 2020, only to be later released.

Gordon encouraged the young players to work hard and listen to their coaches, saying, “I’ve seen players in my time who don’t go to the next level because they haven’t taken their classwork serious. You have to continue to work hard, both on and off the field.”

“Playing football is fun. You want to enjoy it, but at the same time you have to commit to putting in the time,” added Gordon. “Listen to your coaches.”

Gordon was pleased that the PacificaTigersharks and Realnine Football joined to hold the camp.

“The camp teaches kids at an early age how to play the game without tackling or leading with the head on tackles,” said Gordon. “CTEs scare people. Parents worry about their kids getting hurt. My dad wouldn’t let me play football until high school.”

According to the Boston University CTE Center, chronic traumatic encephalopathy is a degenerative brain disease found in athletes, military veterans and others with a history of repetitive brain trauma.

Piccolotti, who along with Rush is a lead instructor, says he is very pleased with the camp. “It’s going great. The kids are having fun. It’s been a big success. The only negative is the numbers.” Just nine kids registered.

“The positive for those nine is that they get individual attention, “said Piccolotti. “Every youth is learning how to play every position. Plus, every parent of these kids asked if we can hold a future camp.”

“We would love to hold another camp later in July; however, we would need the numbers to increase,” added Piccolotti.”Hopefully, word will spread to other kids — and parents — about this program, which really promotes playing football safely.”

“With no Pop Warner program this is our only hope to grasp onto something. We need a feeder program for Terra Nova football,” said Piccolotti. “We’re excited about a Realnine league starting this fall.”

Nanda Gatley is the mother of 10-year-old William, who had never played organized football prior to the camp.

“While he has played other sports, we never let him play football,” said Gatley, whose husband, Bob Gatley, played for Rush at City College in 1998. “My husband played football in high school and college. He did not want William to be exposed to head concussions and possible trauma at an early age, so we intentionally did not allow him to play.”

“When this program was introduced, we learned more about it; we learned it was not going to be tackle,” she added. “We thought it would be a great exposure for him to play football. He loves it. The workout is awesome. We are very happy about what they are teaching him — the strategy of the game, lots of fundamentals, safety protocols. It’s a great first exposure.

“Following medical findings, parents don’t want their children playing football at an early age, so when you have an opportunity like this, to have your child be active, exposed to learning the game, not having to worry about concussions, it’s a great first opportunity to playing the game,” said Gatley, who, with her husband and three children, has lived in Pacifica for 15 years.

“This camp is pretty cool. The coaches all work well with the players,” said Gatley, smiling. “I hope they will hold another session.”

“With a community of 40,000 people, you would think there would be more than 30 kids interested in playing football,” Rush said. “I know people freak out on CTEs, and kids have a lot of choices to play other sports, but hopefully parents will learn of our program so we can offer another camp.”

Parents interested in Pacifica Tigersharks hosting another camp for fifth- through eighth-grade youths can register at realninefootball.com or pacificatigersharks.com. The $240 registration fee includes medical and liability insurance, the rental of soft-shell equipment, camp shirts, and a daily snack.