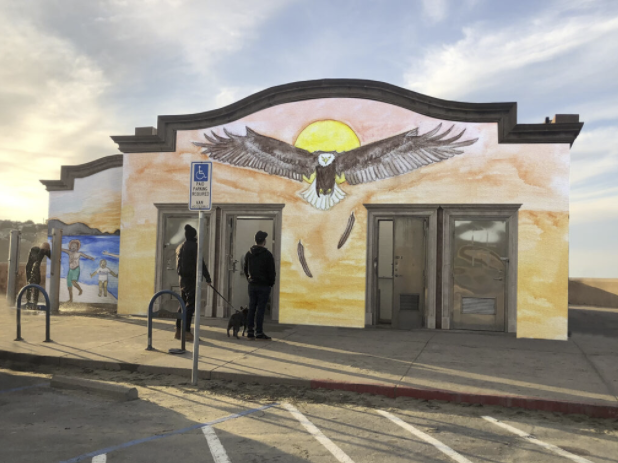 Muralists plan a different theme for each of the four sides of the pump station and bathroom building. Illustration courtesy Danielle Gustavson 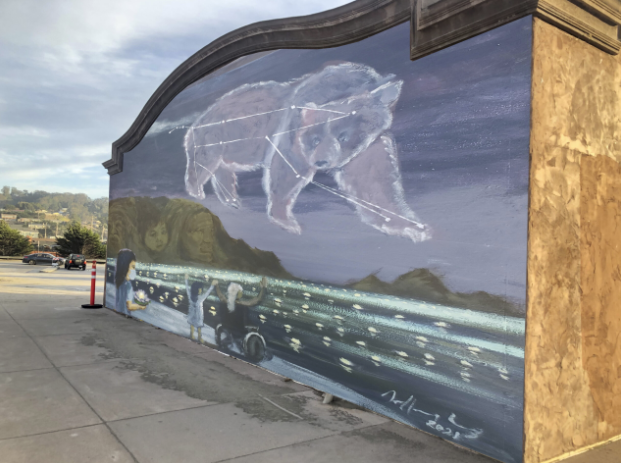 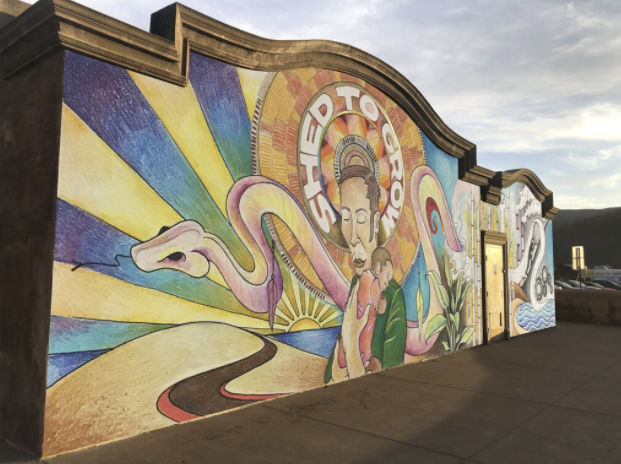 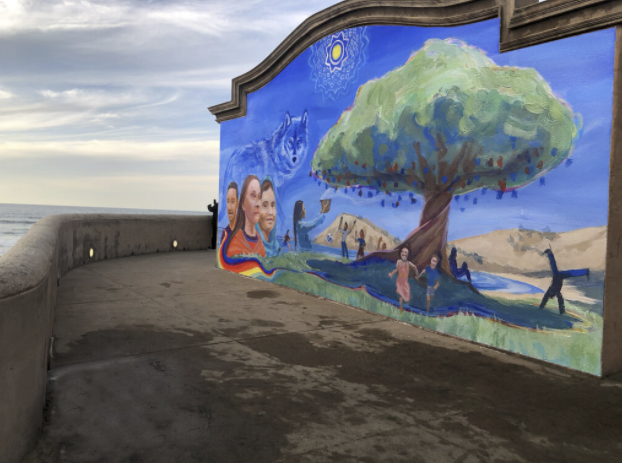 A mural will soon be painted on the walls of the Linda Mar Beach north pump station and bathroom building, and the concept includes a nod to the first people to inhabit Pacifica.

Pacifica Murals Project received approval from the city’s Beautification Advisory Committee. It will create four panels, each depicting a season of the year and a stage of life from birth through death, and it will honor those lost to COVID-19 and victims of racial violence.

The first mural will most likely be painted in May once $6,000 in funding is secured, said Danielle Gustavson, one of the organization founders. The murals are based on the Native American cultural concept of the “four directions of the medicine wheel,” each holding equal importance, part of a larger circle that connects all, said Gustavson. She came up with the “four directions” concept, inspired by her own cultural heritage to live in harmony within herself and with nature, she said.

“It was inspired by the times we have all been living in. It reflects all of us and different backgrounds,” she said. “The other artists added more symbolism. They have their own theme within the theme.”

All the artists said they enjoyed collaborating on the concept for the design, and hope to work together again as a team. Each chose a panel that reflects a unique place in the world: working with children, expecting a child, taking care of an elderly grandfather or enjoying the colorful changes in the autumn season.

The murals will be painted clockwise: Jason Budowski on the south wall, followed by Robert Louthan on the west wall, Jeffrey Wong on the north wall, and ending on the east wall with Gustavon. Gustavon was supposed to go first, but she said she cannot manage scaffolding in the final weeks of her pregnancy.

Budowski said, if the weather cooperates, the painting could take as little as three weeks. He loves working with young people who take his classes at his Bay Area Art School. He’s offering a summer camp where children hike in the morning, take pictures, then return to the studio to create an art piece about what they saw.

“I’m a realism-based drawing person. The tree of life represents the wisdom of the earth. I wanted to put in people who weren’t too far away from being kids, as young adults. This represented a lot of what the youth is asking for,” he said.

The mural shows young activists Budowski admired: Zanagee Artis, co-founder of the climate justice organization, Zero Hour; Greta Thunburg, a Swedish climate activist; Malala Yousefzai, an advocate for education for girls; and Autumn Peltier, an Anishinaabe indigenous clean water protector from Canada, he wrote in an email to the Tribune.

Louthan said autumn is his favorite time of year. He is painting colorful autumnal scenes — a father embracing his child illuminated in a halo of a Native American textile pattern and a calm ocean transitioning into a scene of factory pollution.

Trained in graphic design and in indigenous designs for computers, Louthan is an artist who teaches art in San Francisco’s Unified School District with Precita Eyes Muralists. He’s worked with students to create murals at their schools. He’s painted 40 murals around the world in seven countries with the idea that art serves society, he said. He painted a mural along the Pacifica Resource Center building on Palmetto Avenue.

He encouraged all to come out and watch the painting process.

“We want to be engaged and share the process,” he said “We have a grassroots spirit that is driving this project.”

Wong’s wall pays homage to elders and the lives lost to the pandemic.

“North is the direction of our elders, winter, the bear, wisdom, stillness and death,” he wrote in an email to the Tribune.

Wong has been a muralist for 10 years in public spaces and private homes. He painted the mural at the Pacifica Community Center depicting the meeting of the Portola expedition and the Ohlone Tribe. He painted a mural at each of the Boys and Girls Club clubhouses in Pacifica.

He said he picked the north wall because he’s been taking care of his elderly father for more than 15 years as his main occupation.

“I am directly involved with him and met a lot of senior citizens. They are a less visible part of the community. I want to pay homage to ancestry and the elders, and remember those who have passed, especially in the year of the pandemic,” he said. “There is a vast portion of the community, homeless, displaced and the elderly. I wanted to represent (them) as best I can, and for those whose heritage was forgotten, like the Ohlone.”

The mural shows an Ohlone grandmother and grandfather with a grandchild.

Gustavon works as an art teacher for all ages. As Pacifica Murals Project creative director she hopes this project will inspire others to support more art projects, especially from youth.

Her mural features the rising sun, spring, children and new beginnings that call for action; the bald eagle is a protector, she said. The other side shows children lost in play at the beach with loving parents watching. One of the parents is George Floyd with his 7-year-old daughter, Gianna.

“I want this to be a happy memory of visiting the beach, to honor the collective humanity that lies within this story,” she said. “The theme is unity in diversity.”

Erica Falk, co-founder with Gustavson, works as an end- of-life and birth doula to help people use art as a therapeutic medium. A friend, David Martinez, challenged her to create this project about hope and unity last May.

“This is important to bring life to diversity in our community. To help and heal and open the heart,” Falk said.

To help out with the Pacifica Murals Project or Sanchez Arts Center, the fiscal sponsor for the murals, go to: pacificamurals.com/donate/. The fundraising began April 19, with more than $2,000 raised in the first two days.