You are the owner of this article.
Edit Article Add New Article
You have permission to edit this article.
Edit
Welcome, Guest
Home
News
Coronavirus
Sports
Community
Opinion
Obituaries
Classifieds
Calendar
Services
About
SUBSCRIBE
1 of 6 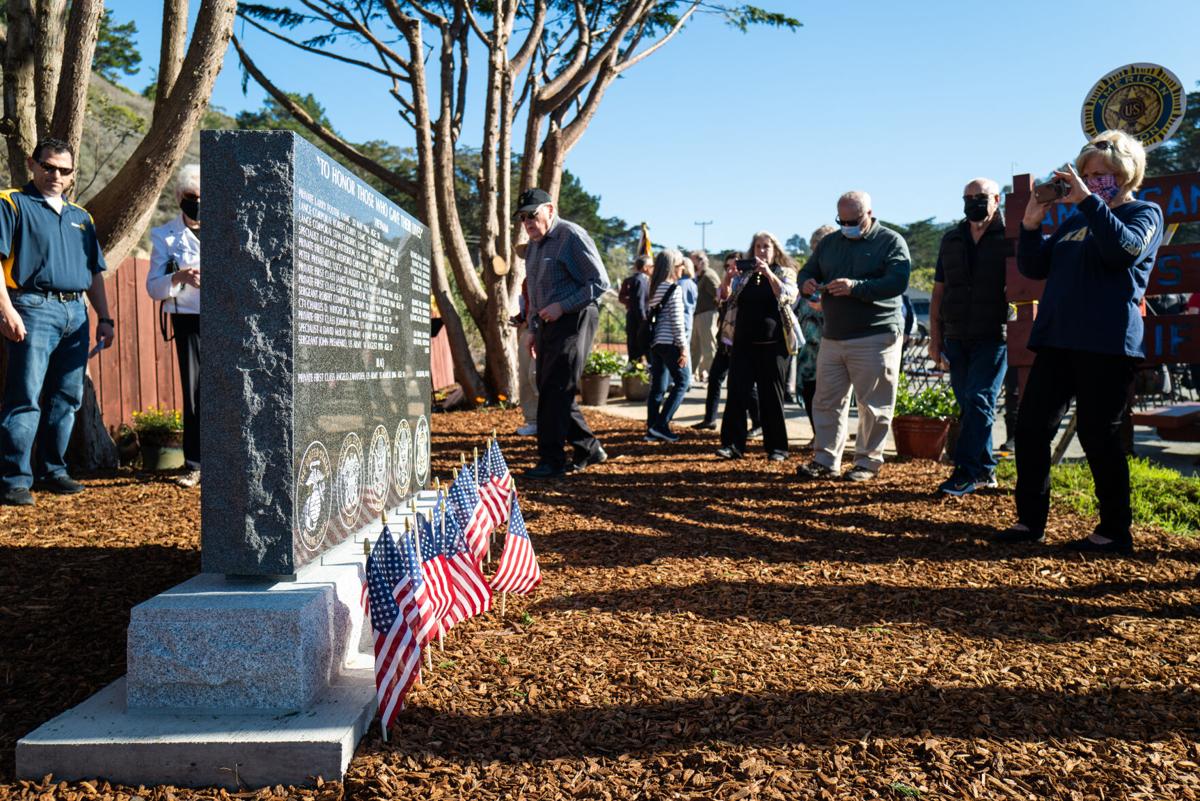 People gather around the newly installed monument at the American Legion honoring Pacificans who lost their lives in the Vietnam War. Adam Pardee / Tribune 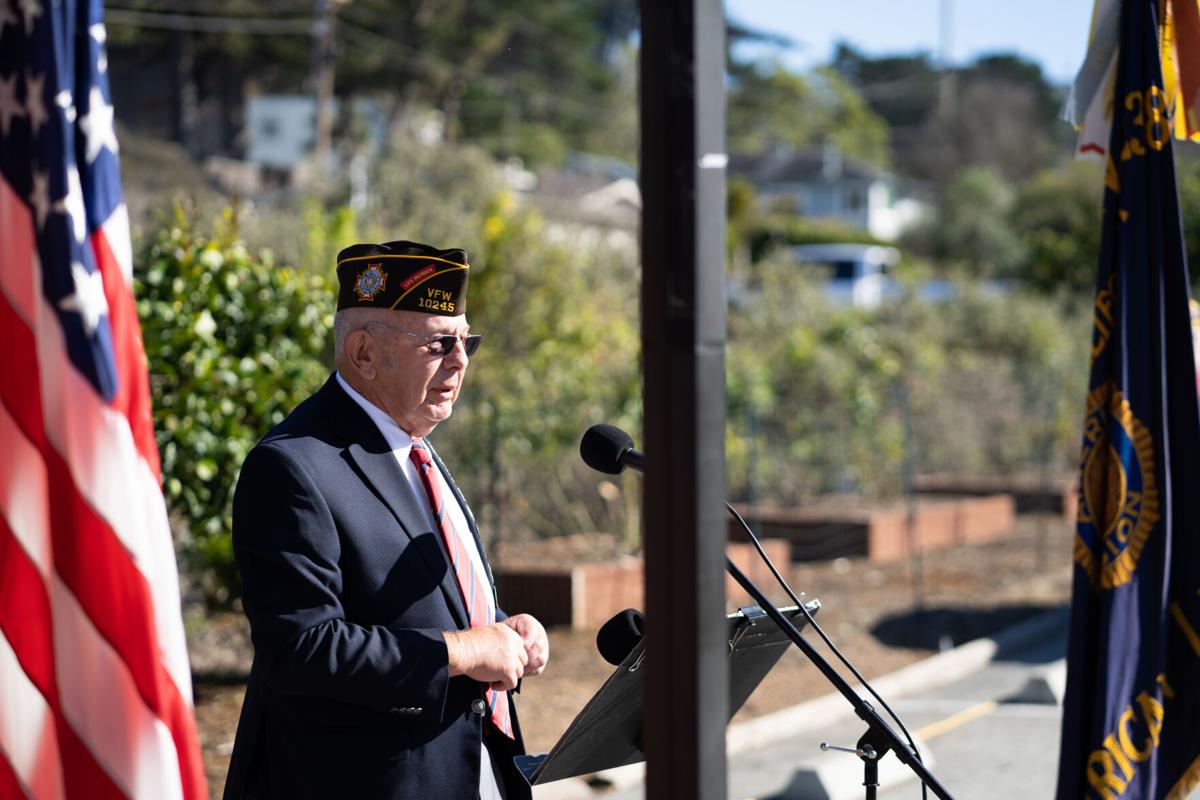 American Legion member Alan Hale speaks at the Memorial Monument Dedication Ceremony in honor of the Pacificans who lost their lives in the Vietnam War. Adam Pardee / Tribune 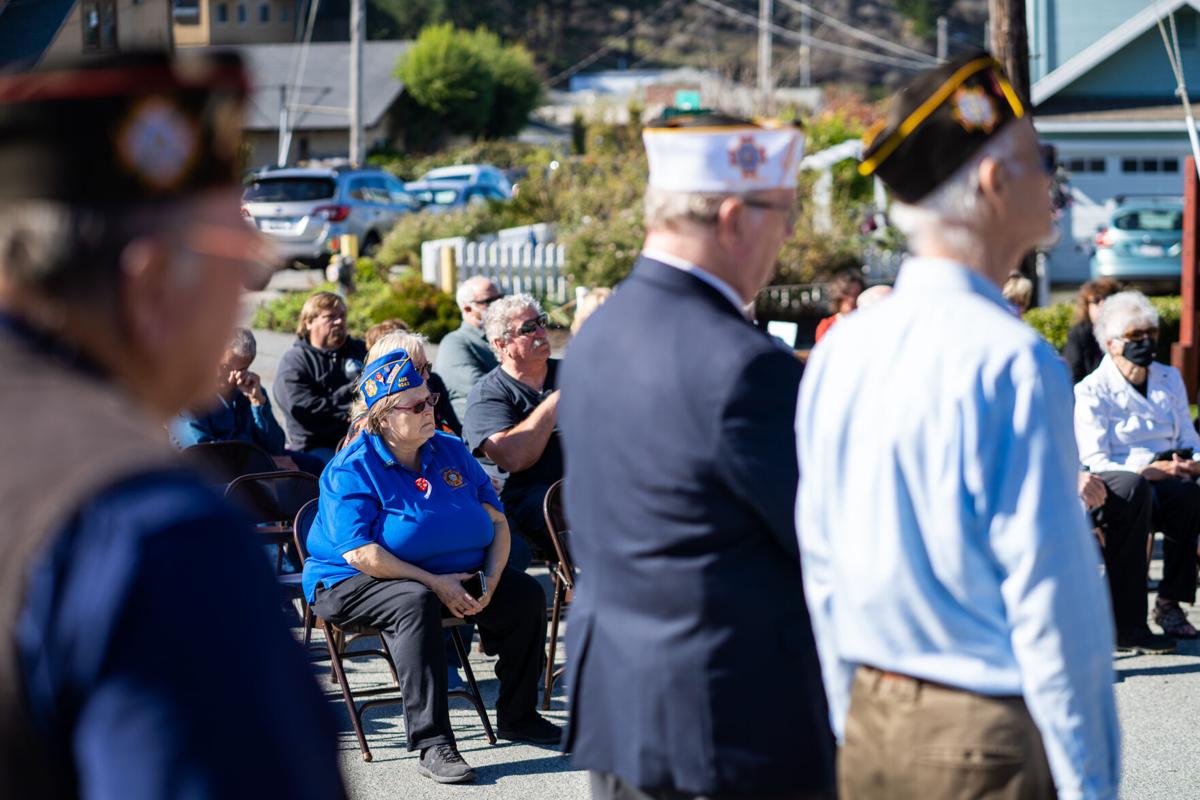 People gathered to the American Legion to witness the Memorial Monument Dedication Ceremony held in honor of those from Pacifica who lost their lives during the Vietnam War. Adam Pardee / Tribune 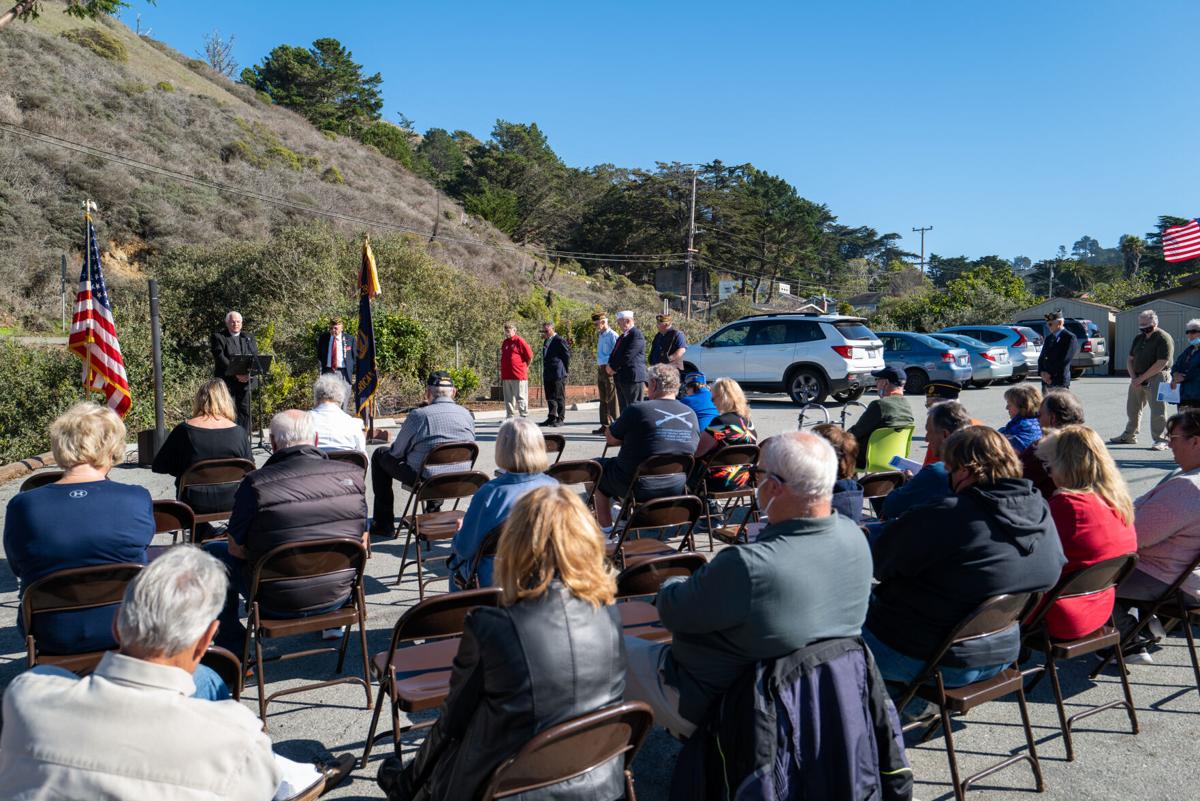 Pastor Nibbe speaks at the Memorial Monument Dedication Ceremony in honor of Pacificans who lost their lives during the Vietnam War at American Legion in Pacifica. Adam Pardee / Tribune 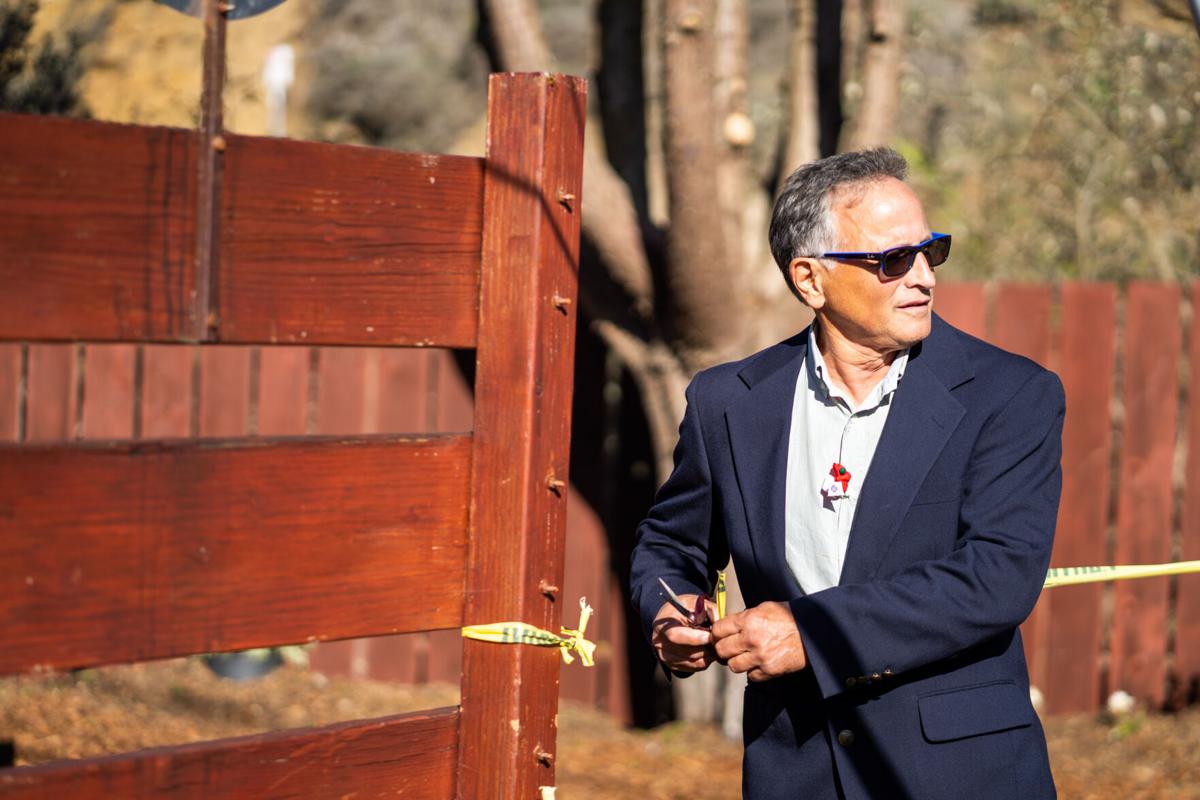 Veteran and organizer Rich Jasso cuts tape surrounding the new monument honoring the Pacificans who lost their lives in the Vietnam War during the Memorial Monument Dedication Ceremony at the American Legion. Adam Pardee / Tribune 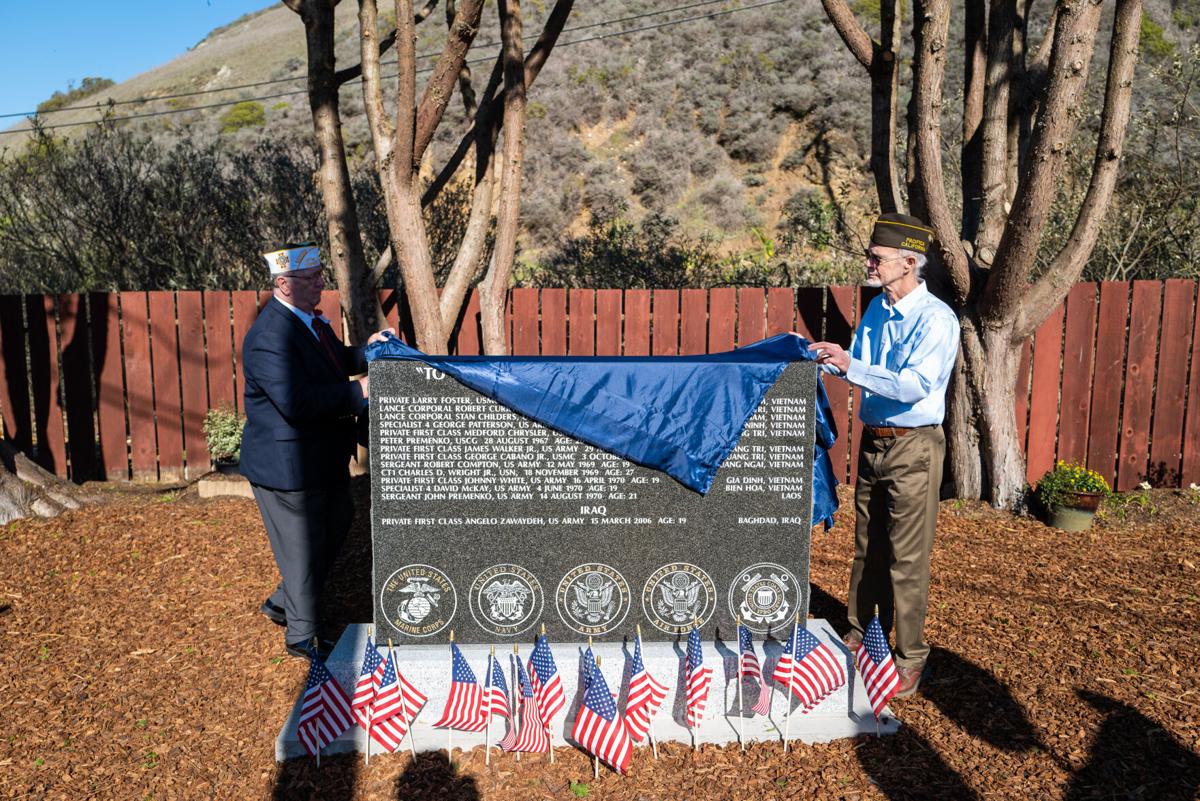 Veterans unveil the newly installed monument at the American Legion honoring the Pacificans who lost their lives in the Vietnam War. Adam Pardee / Tribune

The Pacifica Veterans Memorial Group dedicated an outdoor monument for Pacifica residents who died in Vietnam and Iraq on Thursday, Veterans Day, at the American Legion Post 238.

Rich Jasso, Barbara Petersen, Mike Jelinsky and Patti Hawker are the members of the Pacifica Veterans Memorial Group who decided to build this memorial.

Only family members of the deceased and donors to the project were invited to the event unveiling the monument. There were about 100 people in attendance. Local writer Jean Bartlett wrote memorial stories about all the Pacifica boys who died in Vietnam and the one who died in Iraq. Those can be read at www.bartlettbiographies.com.

Pastor Tom Nibbe read scripture to open the ceremony. Allan Hale of the American Legion post thanked all for their donations for the project that was several years in the making.

Hale said the land for the monument was donated to the American Legion by the family who owns Sea Bowl. The area was cleared of poison oak by an Eagle Scout. The area still has to become ADA accessible to meet city code.

“This is where it belongs,” he said.

He expressed gratitude to the V. Fontana Company and owner Mark Fontana who created the monument and the cement work underneath it.

Jasso said when the Moving Wall, a half size replica of the Vietnam Memorial, came to Oceana High School on a tour of small cities in 2003, he realized something bittersweetly healing about finding the name of someone you knew or had forgotten.

“On that windswept cool day in April, I filmed and watched my wife, Suzanne, search the register for her cousin’s name and then sadly run her fingers across Private Timothy McGuire’s inscription. When she found him, I realized there was an entire column of Pacifica names I had overlooked,” he said.

He returned to the wall later that evening with a friend, Jackie Thompson, who looked for and found the names of the people they knew. Jonny White, Jasso’s schoolyard friend. Dave McCay, known for an infectious laugh. Stan “The Man” Childers, a Terra Nova star athlete whose death shook up the Linda Mar community. George Patterson, the neighbor who always said hello on his bike.

After the Moving Wall left, he became acquainted with Maureen Compton whose brother Sgt. Robert Compton is memorialized today.. She has since passed away but it was her idea to have the memorial be more than a video film production about the servicemen. She suggested a plaque at both high schools.

“The desire to uphold that promise was rekindled two years ago in a Pedro Point coffee house with another former Terra Nova classmate, Retired Major General Michael Jelinsky,” Jasso said. “I knew that Mike, who was the first person from Pacifica appointed to West Point, would keep us on track to get this done. He was committed to honoring his friends and fellow veterans.”

At their 50th Terra Nova High School reunion in 2019,Jasso approached Patti Hawker and Barbara Petersen and enlisted them into working on the dream of the monument. He credits Hale at American Legion Post 238 and the Veterans of Foreign Wars for making the project happen.

“We made it our goal to tell the stories of these boys we knew,” Jasso said. Bartlett wrote where the boys went to school, played Little League, got in trouble, had their first date, first kiss, and first car.

“The one true distinction about this memorial is that it bears the names of the first generation of children born to parents who came to Pacifica in the 50s and 60s. Many were veterans themselves,” Jasso said.

City Council gave the Pacifica Veterans Memorial Group a proclamation in appreciation as did the San Mateo County Board of Supervisors.

Members of the public may stop by the American Legion Post 238 at 555 Buel Ave. to see the outdoor monument any time.

Excellent write-up of the event, and photos.