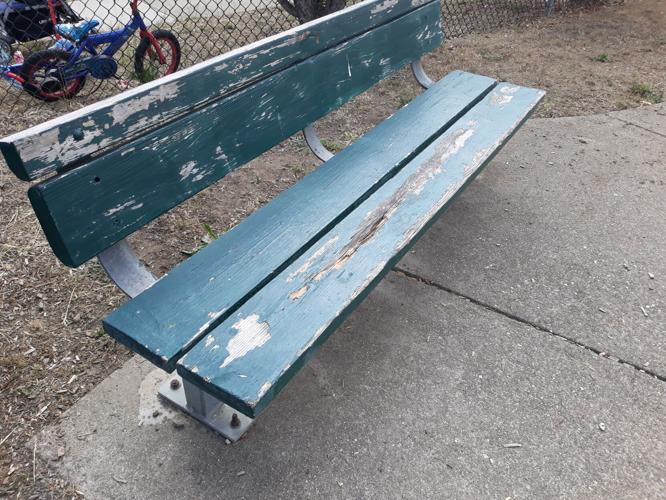 A wooden bench at Brighton Park could use a little love 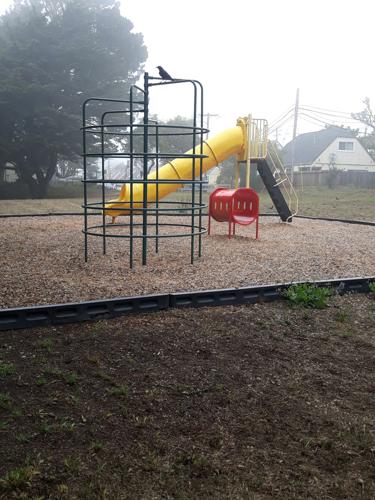 The playground at Skyridge Park was abandoned save for a solitary crow on a recent foggy day.

When the yellow slide at Skyridge Park was first installed, the children who played on it were also cuddling Cabbage Patch Dolls and watching Teenage Mutant Ninja Turtles on TV. The park shows its 30-plus-years age, and it’s not alone. At some Pacifica neighborhood parks, the playground structures are rusted, the pathways rutted and the benches rotted.

But plans are on the drawing board to upgrade four of the city’s aging parks — Skyridge, Brighton, Marvilla and Imperial — and officials at Pacifica’s Parks Department are asking residents for their input.

This Saturday, July 16, at Imperial and Skyridge parks, park officials and architects working on the redesigns will show the plans and ask the public for comments. They’ll be at Imperial Park from 9 to 11 a.m. and at Skyridge Park from 1 to 3 p.m.

website. (From the home page, search for “Priority Parks Project.”) Residents living within a couple of blocks of each park were mailed postcards with links to the plans and meeting information.

The plans available online propose new wooden play structures for all four parks, with accessible surfacing beneath; it could become rubberized safety mats. The project will add new picnic tables and benches, upgraded and expanded pathways, and improved, fully accessible entrances. The project does not include major changes to the park plantings.

Meetings for Brighton and Marvilla parks were held last weekend. “About 20 people showed up at Brighton, including kids,” said Mike Perez, director of the Pacifica Parks Department. Matthew Gaber, one of the design consultants, described the crowd as “very engaged … with a lot of good ideas, local knowledge and excitement to see the park upgraded.”

People were interested in seeing a greater variety of climbing structures, including more for older children. Swings and slides are popular, as is the theming of different parks.

“We were inspired by the community and are eager to start refining the concepts,” said Gaber in an email.

Once the comment period closes, the design team will use the feedback to complete its work. Construction could happen sometime next year.

The four parks were chosen based on the age of their structures, need for amenities and location within the city. The work is being funded by the Roy H. Davies Trust, a $3.45 million gift to the city that is dedicated to improving Pacifica’s park and recreation experiences. The Parks Department has a long-term plan for upgrades to other sites in their 25-park collection, but no immediate projects scheduled.

If you can’t make the meetings, the city encourages you to comment by calling (650) 738-3767 or by completing an online survey at https://www.surveymonkey.com/r/pacificaparks. The comment period will be open through July 23.

Well done, Eileen. Glad you are writing for The Tribune!

Something about Oceana High School and Maritza Torres just clicked when she arrived on site for an interview for an internship in 2011.

When the yellow slide at Skyridge Park was first installed, the children who played on it were also cuddling Cabbage Patch Dolls and watching Teenage Mutant Ninja Turtles on TV. The park shows its 30-plus-years age, and it’s not alone. At some Pacifica neighborhood parks, the playground stru…

A Good Shepherd Troop 74 Eagle Scout has earned his distinction with a project designed to help people far from his San Mateo County home. Mario Alfaro put together 600 Ziploc bags with soap, shampoo, conditioner, toothpaste, toothbrush and lotion to go to the border at Nogales, Ariz.

San Mateo County Assessor Mark Church announced last week that property tax assessments increased by $22.2 billion, or 8.34 percent, to reach a record high of $288 billion. That figure represents the combined tax basis for all residential and commercial property in the county.

It’s not every day Pacifica kids get to see wildlife at the library. But that is what happened on July 6, when Wildmind Science Learning, formerly Wildlife Associates, a nonprofit organization on the coast, brought four interesting animals to town.

A retired postmaster from the El Granada Post Office has been taking photos of wildlife, especially birds in motion, seascapes and landscapes. Leo Leon became interested in photography when he took a course in school and really enjoyed it. That was 1966. He’s been a photographer ever since.

In the wake of the May shooting at Robb Elementary School in Uvalde, Texas, local school districts are reviewing and enhancing security measures on their campuses.

Ever since Pillar Point Harbor’s eastern breakwater was constructed in 1961, two environmental factors have been at play. Sand hasn’t been able to sweep to the southern beaches, and that has caused rapid erosion at Surfer’s Beach. So the sand has built up inside the harbor, effectively creat…

Pacifica Police have arrested a San Francisco woman, charging her with receiving stolen property after allegedly stopping her in a stolen car.

The Pacifica City Council unanimously passed a budget for the fiscal year 2022-23 showing a balance that depends on federal pandemic recovery funds to make ends meet.