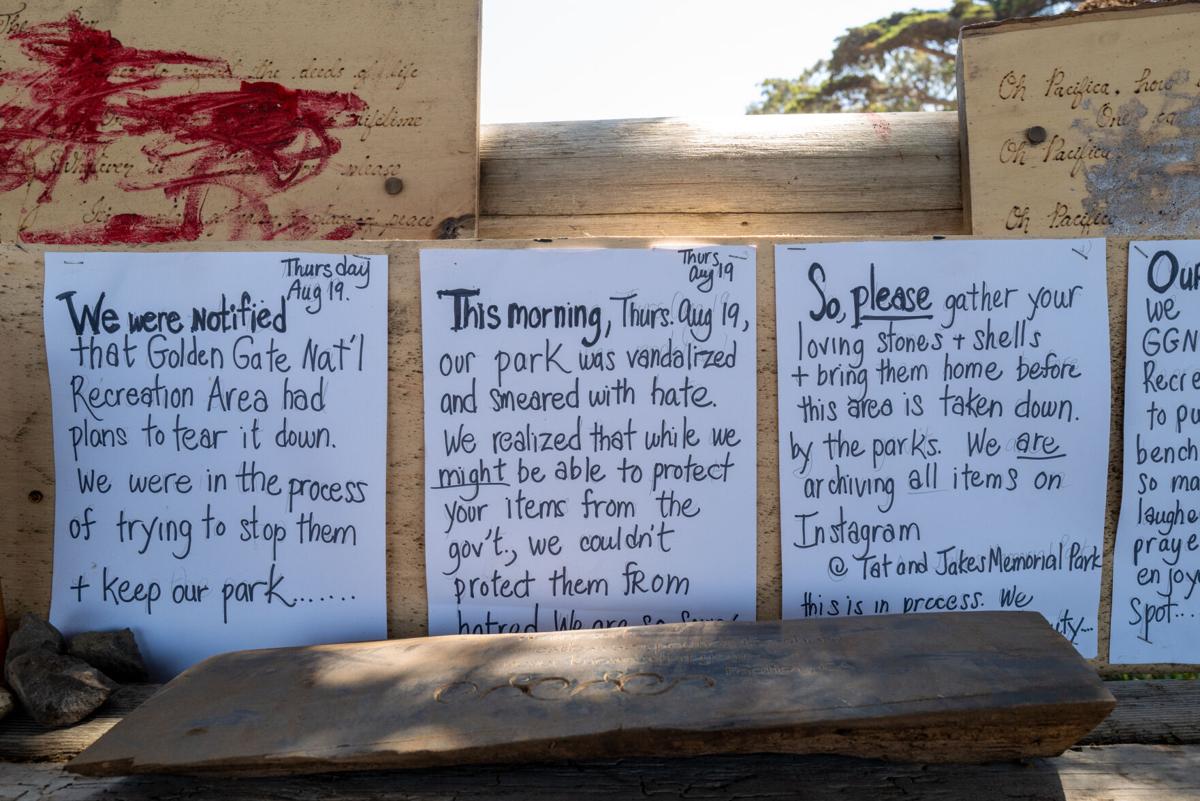 Signs posted inside a makeshift memorial in Mori Point inform people to remove their items before they are taken down by the Parks Department. Adam Pardee / Tribune 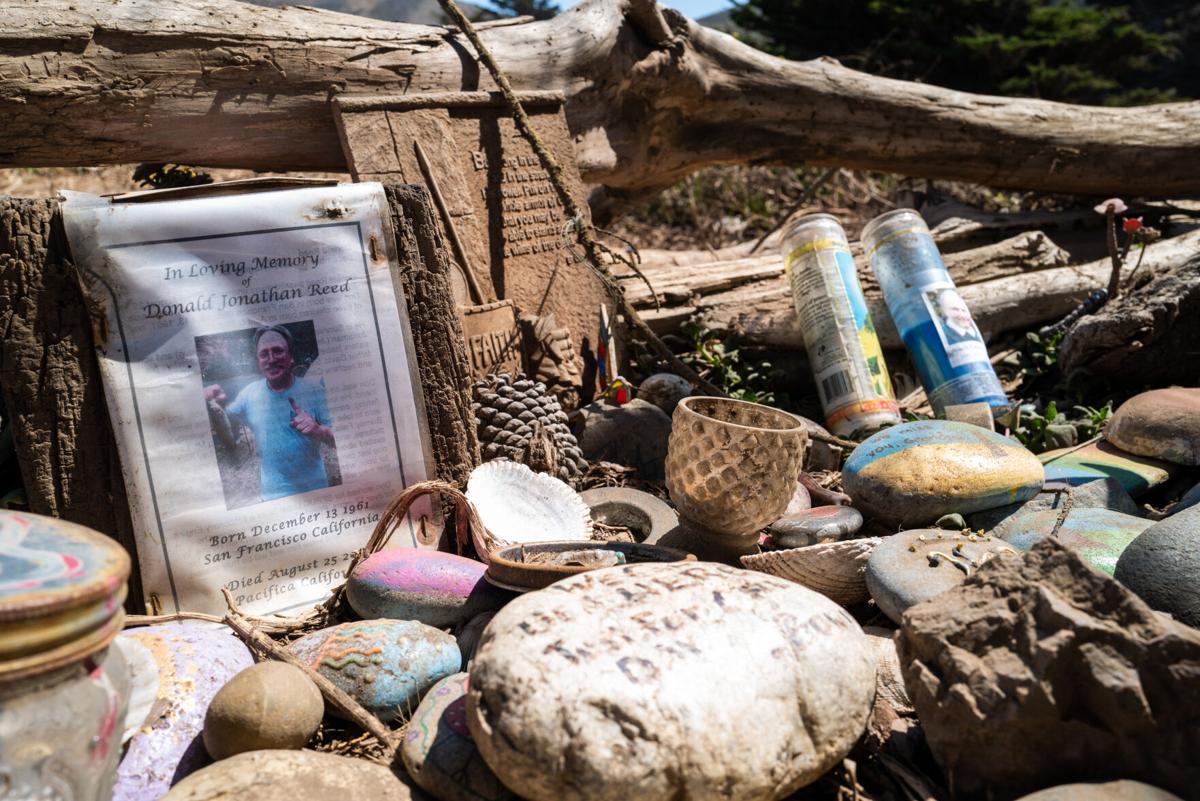 A makeshift memorial full of trinkets and reminders of past loved ones sits underneath a tree in Mori Point in Pacifica. Adam Pardee / Tribune 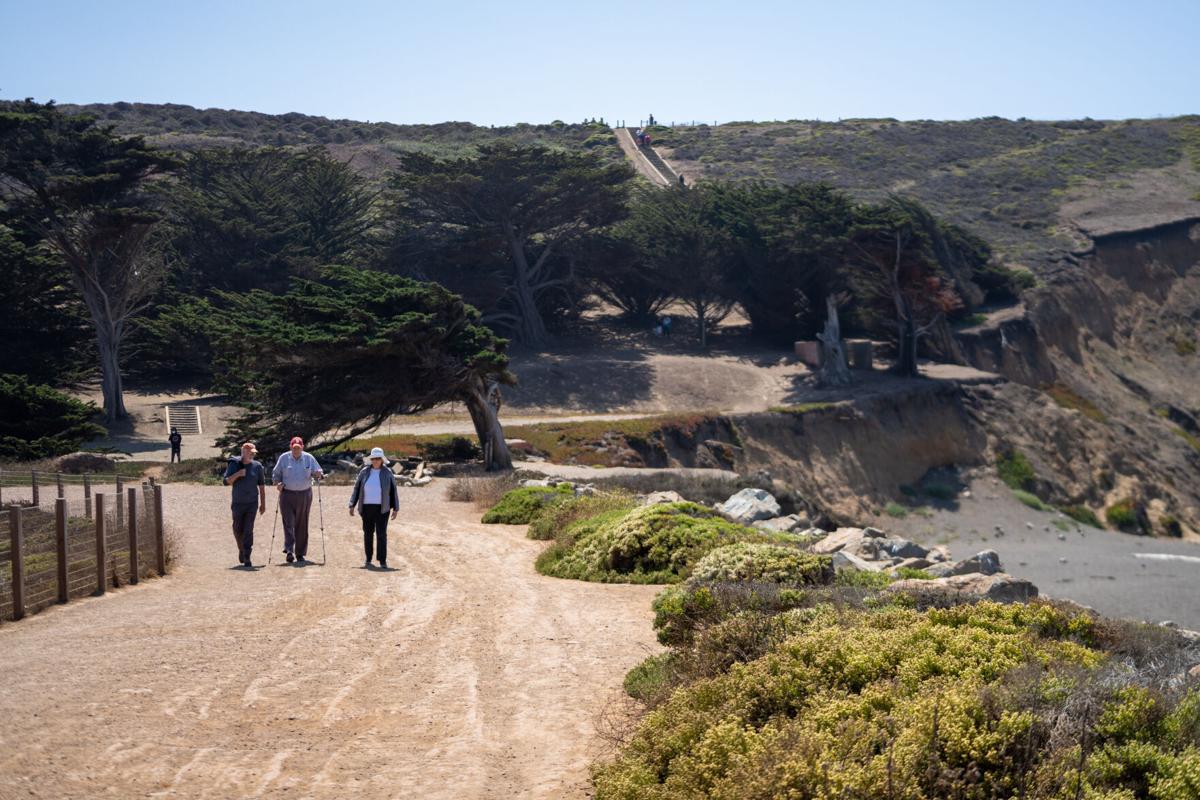 A makeshift memorial sits under the tree at the intersection of the Mori Point Trail and Coastal Trail in Pacifica. Adam Pardee / Tribune

A makeshift memorial at Mori Point, containing mementos left by walkers, has to go, said the National Park Service. Golden Gate National Recreation Area, a division of the service, oversees the area where the memorial is located at Mori Point.

Pacifican Suzanne Drake said that during COVID-19 no one could attend memorial services, so the spot at Mori Point gave people a quiet place to pay homage to their loved ones.

“Adam Drake and Trish Richman started this makeshift memorial from stuff they pulled off the beach, driftwood. It grew,” she said “People brought poetry and decorated rocks. Letters in a bottle. There were hundreds of items. It became a little park growing on an old landfill. People meditate there.”

They now have three weeks to remove what’s left, including the planters, rocks and benches.

The GGNRA maintains the memorial is a safety hazard. "We are definitely sympathetic to this group's interest in the site, especially considering the challenges brought by the pandemic, but unfortunately neither the National Park Service nor San Francisco Recreation and Parks Department can allow it to continue for public safety reasons," the parks service said in a prepared statement.

Adam Drake said it began with a pair of fins for a neighbor and friend. When his son died of a fentanyl overdose in January 2020, he put up a swing.

During the COVID-19 lockdown, he saw many people bringing a piece of decorative wood and other memorial items, so many that he built a couple of shelves to house them. There was a planter there, decorating the memorial area at the end of the flat Mori Point trail where the trail meets the golf course levee.

“The community had a place to go and reflect. People put in memorials for pets. We added more planter beds and succulents. We made two driftwood benches. I met a lot of people who put stuff there. It was emotional for me,” he said.

He is trying to overturn GGNRA’s decision to remove the memorial. GGNRA told Drake and City Councilwoman Sue Vaterlaus, no private memorial can be left on public land. GGNRA said it received complaints the memorial looks tacky and it was a tripping hazard.

“It is my hope to minimize the complaints of tackiness. We’ve taken down whatever we felt was a tripping hazard. We took out all the benches and some of the planters,” he said.

Vaterlaus met with Natalie Dayal from GGNRA along with Drake and a representative from San Francisco Parks and Recreation. San Francisco owns the golf course next door. The memorial area is right where GGNRA land meets San Francisco land.

“I talked them into giving them six weeks to remove the memorial because there was a lot of personal stuff in there. Then it got vandalized. Drake started dismantling it,” Vaterlaus said.

At the meeting, GGNRA told Vaterlaus the plan was to put everything in the dump.

“All the driftwood had been picked up from the beach and they were going to dump it? This was a dump site. Now tires are coming out of the ground from the dump site. When GGNRA goes there, it is going to be a problem for them,” Vaterlaus said.

Drake wants GGNRA to put in National Park Service-approved benches, as they have up the trail.

“What’s left is two planters. All the memorial painted rocks have been removed,” Drake said.

“On Sept. 18, the Pacific Beach Coalition invited all to save your ‘happy place’ on California Coastal Cleanup Day. We are going to have people come out and reassess what needs to be done. It’s a community beach and a lot of people have a stake in the memorial,” he said.

Suzanne Drake met a lot of people who take photos at the memorial site.

“I met someone who brought out rocks for his wife and mother,” she said. “It’s sad. It would be nice to keep the flower beds made of driftwood. This is a beautification of an old dump. We should get the word out if they left a memento to retrieve it before it gets dumped by GGNRA. People have been taking some of it down because of what GGNRA said.”

Anyone wishing to be heard on the matter is encouraged to write to goga_public_affairs@nps.gov.

Bonnie McNamara wants to spread awareness about an opioid epidemic that is an ongoing public health crisis. It’s also a personal battle for her and for many on the coast.

Pacifica police arrested a local man for felony DUI after they say he was responsible for a hit-and-run collision on Francisco Boulevard on July 25.

A crowdsourcing fundraiser has been set up for a 74-year-old Pacifica woman who was hit by a car while walking across San Pedro Avenue last month.

The great white shark population off Northern California's coast is healthy and growing, researchers say. Such conclusions were drawn from a study that occurred, in part, off of the Coastside.

San Mateo County joined seven other Bay Area jurisdictions in requiring masks in public indoor settings after COVID-19 has resurged in the region. The new restrictions affect all residents, not just those who are unvaccinated. It will go into effect at 12:01 a.m. on Tuesday.

The first transitional housing shelter for unhoused people in Half Moon Bay is now serving 34 people and expects to be close to capacity in the next month.

Gun sales have increased on a national, state and local level during the pandemic, evidence suggests.