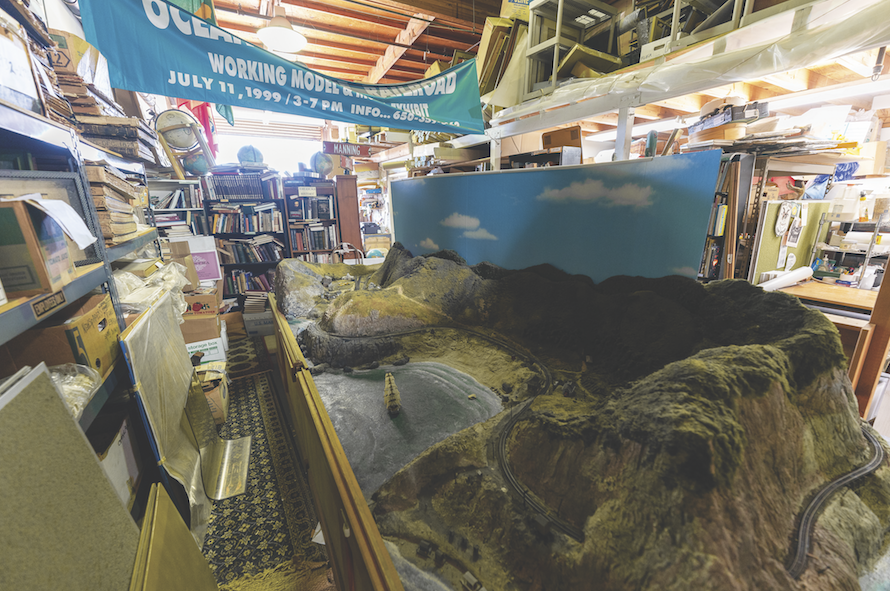 A model of the Ocean Shore Railroad has been all-but hidden from view at Kathleen Manning's Pacifica business, Prints Old and Rare. Adam Pardee / Tribune 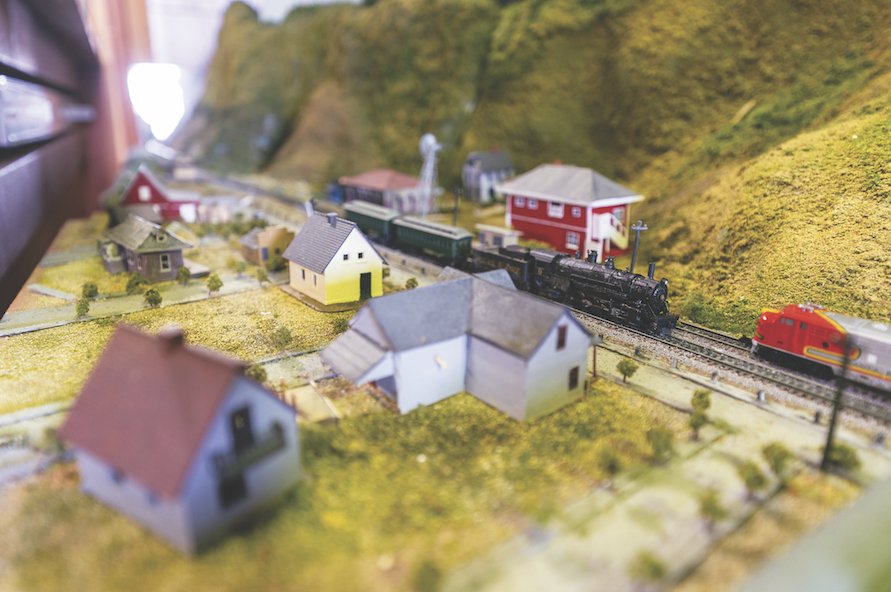 The model of the historic Ocean Shore Railroad is coming out of storage for a permanent exhibit with the Pacifica Historical Society.

The Ocean Shore Railroad ran from 1903 to 1920. From the north, it ran from San Francisco through Daly City to the ocean, then traveled through present-day Pacifica. It passed Devil’s Slide, Montara, Moss Beach, El Granada and Half Moon Bay. The train continued until Tunitas Creek, south of Half Moon Bay. From there, a jitney took riders over a patch until the train ride resumed, eventually ending in Santa Cruz in the south.

“It was a big deal,” said Kathleen Manning of Prints Old and Rare, where an elaborate model of the train is now stored.

The model train shows all the stations, the engine and six cars. The station names are familiar to Pacificans — Vallemar, Quarry and Linda Mar, to name a few. It includes landmarks from the era, including Anderson’s Store, most recently Salada Café, and the Little Brown Church, where it will be permanently displayed in the Pacifica Historical Society Museum.

The model train was displayed at the Best Western Lighthouse Hotel until 2003 when new owners wanted it removed. That’s when Manning came to the rescue, volunteering to store it at her place of business.

“It’s been here all these years,” Manning said. “I’m happy to get it to where it will be enjoyed.”

Professional model makers Dan and Armando Vargas built the model with a carpenter’s assistance in the 1990s. They donated their time because they loved the Ocean Shore Railroad and grew up in Pacifica, said Manning. An organization called Ocean Shore Railroad Association raised enough money for the materials.

Armando Vargas said the idea to build the model came from a display of a diorama of the railroad at Vallemar Station Restaurant. Diners still enjoy a piece of Pacifica’s history with the many Ocean Shore Railroad photos on the walls.

“Cal Hinton was mayor at the time and he was a real train buff. Nick Gust was on City Council, too, and he had some Ocean Shore Railroad pictures on the walls of his restaurant, too,” Vargas said.

He added that he was motivated to build the model after learning intriguing facts while meeting with a railroad historian who was visiting Pacifica because of the Ocean Shore Railroad. He met with members of Pacifica Historical Society who provided pictures of the train and as much information as they had.

The Pacifica Historical Society plans a big unveiling of the model on the last Sunday in June. Right now, the 13-by-6-foot model is being restored to its original design by railroad aficionado Rob Wullenjohn, who has experience with model railroads. He will make all necessary repairs and get the train running again. He took his first look at the job that awaits him on Monday.

“The electronics are very old. Some of the connections are not so good,” he said, “With the repairs, we want to make the model look like Pacifica. It needs to be freshened up. Repairing little details, we want to have a model where you can see different parts of Pacifica: That’s Devil’s Slide. That’s Vallemar.”

Wullenjohn is a musician whose band Blue on Green recorded the song “Car 1409” in 2006 about the full-size rail car the history society is restoring. He said he wrote the song at the request of the society when he joined the organization. He credits fellow musician Ian Butler with helping him find just the right lyrics.

“The idea is the rail car is something of the past, something our grandparents may have ridden. It makes reference to Highway 1 and the dreams of development on the Coastside,” he said.

Just a note. When the author talked about 2 railroads running along the coast he misinformed one of the railroads. Amtrak does run along the coast, but it wasn’t formed till 1971. Long after the Ocean Shore had disappeared. Also the tracks Amtrak uses were put in by Southern Pacific, and now are owned by Union Pacific. Also there are/were 3 other railroads that ran along portions of the coast. There was the NorthWestern Pacific that ran to Eureka, also the Santa Fe, now BNSF that ran to San Diego from LA. Lastly there was the narrow gauge railroad South Pacific Coast that ran from Alameda to Santa Cruz via Santa Clara, Los Gatos, Felton, Boulder Creek and down to the Boardwalk. The South Pacific Coast was bought by the Southern Pacific and was changed to standard gauge. The line over the summit of the Santa Cruz mountains was abandoned. But portions are still in use today on both sides. Most notably is the Santa Cruz, Big Trees and Pacific Railroad from Felton to Santa Cruz. As for the Ocean Shore Railroad, read “The Last Whistle” it is a book on the history of the Ocean Shore Railroad with maps on where the tracks ran.