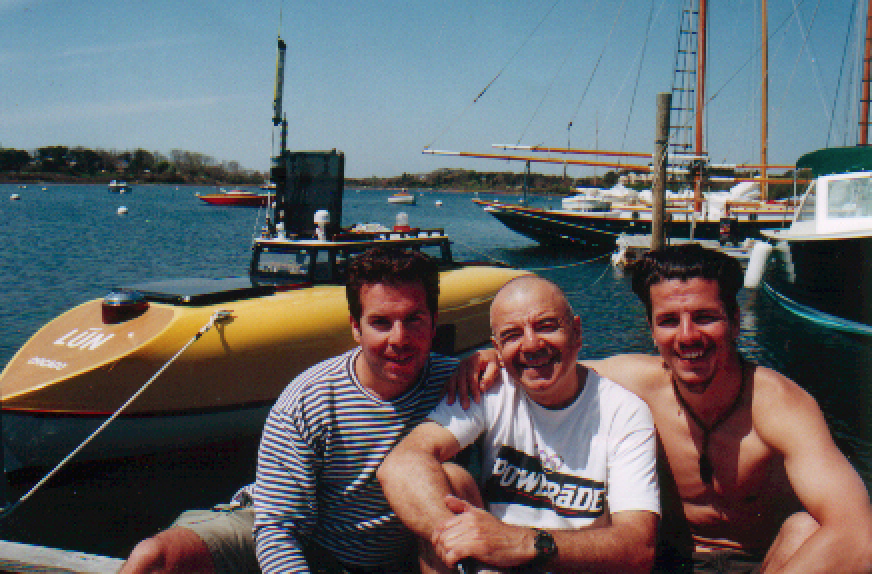 Nenad Belic’s cross-Atlantic voyage ended with his boat, Lun, landing in Pacifica. The Tribune recently recounted that voyage. This week, Belic’s sons reflect on their dad fulfilling his last big dream and all the passion and preparation it took.

Lun is now trailered behind the Pedro Point Shopping Center on Jim Kibblewhite’s land. Roko Belic and brother Adrian searched for a maritime museum to take the boat, but were rejected at every turn, the brothers say. Roko loves hearing from people in Pacifica who look at that curious little yellow boat and read the obituary tribute and the article about his dad’s journey in 2001.

The elder Belic was 62 when he set out from Stage Harbor, Mass., on May 22, 2001. Belic was presumed lost at sea after a storm that fall.

Lun has not been in the water since that five-month trip from Cape Cod to Ireland. It was damaged by a forklift during the recovery.

“An extremely kind-hearted group in Ireland recovered the boat and sent it to us. We moved to Los Angeles, but a friend in Pacifica offered a little piece of land. It will stay in Pacifica,” said Roko. “I would hope to have the resources to resurrect it and put it in the water. It was a continual adventure on a scale that was daunting, on a scale akin to climbing Mount Everest or going into space. It was so outstanding in its audacity.”

The brothers grew up in Evanston, Ill., but loved visiting the Bay Area to see relatives who settled in San Francisco. They were living in Vallejo with their mom and grandmother when Belic made the trip.

It took at least three years to build Lun, said Roko. The brothers drove it from San Francisco to Chicago where their dad rowed to Mackinac Island, Mich., about 330 miles across. That test voyage was crucial to figure out where to stow gear.

“Though I believe my brother and I were his biggest unwavering supporters of the voyage, even to us, he shared little of the reasons behind his endeavor to row solo across the Atlantic,” wrote Adrian in an email to the Tribune. Adrian Belic has been riding out the pandemic on Boracay Island in the Philippines, where he has been paddleboarding and filming a friend’s documentary.

At some point, Nenad Belic’s family and friends told him not to go and he decided to call it off, but he changed his mind in the end, said Roko. He said being able to focus on exploring this dream he designed was fulfilling enough.

“It is through those risks we can get out of the limitations of yourself into a spiritual realm greater than what you thought you would ever have,” Roko explained. “His decision polarized people. Some saw it as a valuable thing. Others thought he was crazy and delusional.

“This is a beacon to those among us who want to learn and grow and be surprised and be engaged in a way that is primal in our world,” Roko said.

Roko Belic, a documentary producer and director, would later make movies transporting himself into a different world.

“That is what motivates me about my father’s experience on the ocean. He put himself in a situation few get to experience,” he said. “That was extremely valuable to him. I talked with him on the satellite phone. He sounded ecstatic. He was in the exact place he wanted to be connecting with the birds and the dolphins and the turtle that followed him for days at a time.

“After my dad disappeared, it became clear there would never be a grave to visit. The ocean was that,” Roko said.

He has talked about his father to his own children — about his life and its example to not be afraid of dreams.

“He was extremely honest in terms of his sense of integrity. If he found a broken parking meter, he would park somewhere else to not cheat the system,” Roko said. “He was born in 1939. He grew up in a time when societies were functioning well because they had social and economic systems in place.”

He saw the benefits of people cooperating in his education and research as a cardiologist.

He said he thinks about his dad all the time. There is a family vacation picture of him in a rowboat with his dad looking happy. As for himself, Roko surfs as much as he can in Malibu and Pacifica.

“It’s very natural. The ocean doesn’t change its temperature for you. You cannot dial up a perfect wave and perfect weather. It’s invigorating,” he said.

Roko said the brothers learned taking risks is a part of those whose lives are interesting. He’s been inspired by his dad when facing

dangerous situations. Adrian went to war zones, including Afghanistan, to work on movies. Roko rode headwaters of the Mississippi in a two-month adventure. He rode a tandem bike across Tanzania and climbed Mount Kilimanjaro. He traveled by horse across Tibet.

“These are the kinds of experiences that help me understand the value of my dad’s trip. They become who you are forever. It brings us back to the basics that are required to sustain us. I’m glad to have that ancestry,” he said.

Adrian wrote that his dad approached all his challenges in life with full force. He researched meticulously, planning with extensive preparations, abundant passion and was relentlessly focused.

“Sometimes we achieve the goal we set out to accomplish and sometimes we don’t. Most people only see the end zone, but some see every yard earned in that pursuit and cherish them,” he wrote.

Adrian wrote that he learned to trust himself from his father. “Difficulty and hardship are not inherently bad, they are merely part of the process to achieving dreams,” he wrote.

“Time is fleeting and life is precious,” Adrian wrote. “That my father disappeared at sea in the prime of his life is a catastrophic tragedy. That his time came while he was pursuing his latest dream is good fortune I wish for all of us.”

Roko Belic is a documentary film producer and director of “Genghis Blues.” Filmed partially in Siberia, it is the story of a blind blues singe…