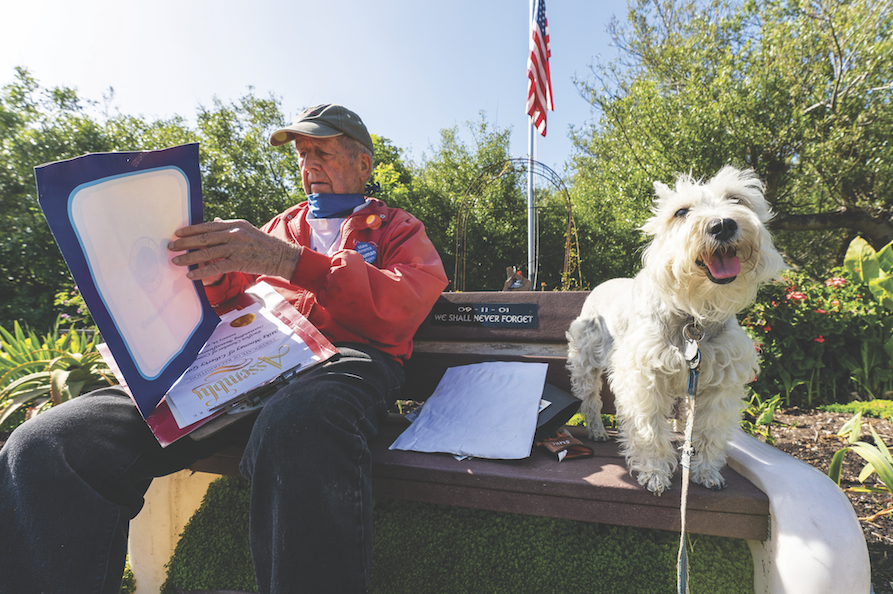 Pacifica garden proponent Mike Mooney looks through some of the community accolades his work has earned through the years. Adam Pardee / Tribune 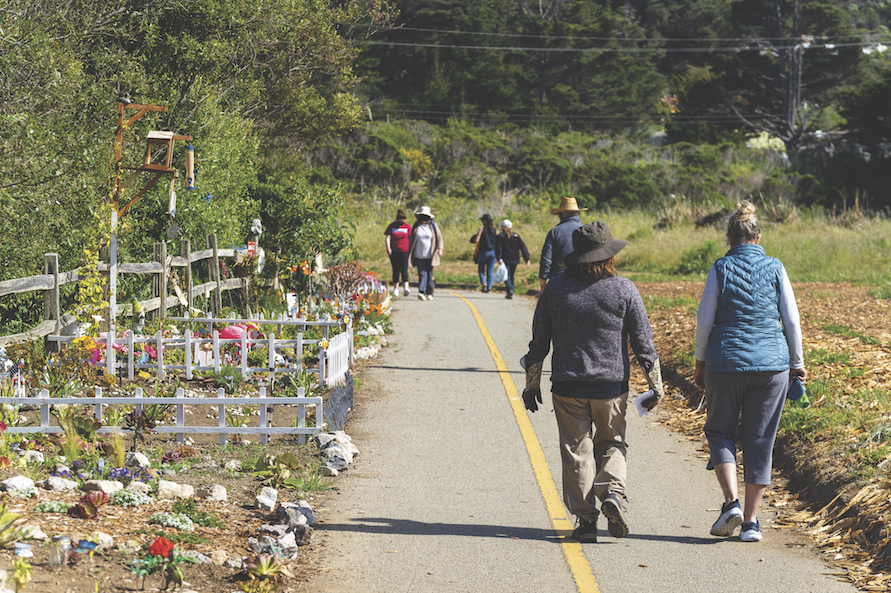 The trail leading to Rockaway Beach is marked by individual gardens designed to beautify the experience. Adam Pardee / Tribune

A broken irrigation pipe at Mike Mooney’s Liberty Gardens led to an assessment that the gardens past those original plots will have to go.

The recycled water irrigation pipe serving a sprinkler system that waters the gardens three times a week was broken about two weeks ago, but it is working again now, said Sandy Rizzetto, one of the volunteer gardeners. More than 30 gardeners adopted a patch of Mike Mooney’s original gardens and planted their own gardens along the walking trail, she said. The gardeners set up containers to reach places with no sprinklers. Some haul water from home.

On that first day with the broken pipe, the gardeners drew water from Calera Creek. Soon, a sign was posted by the city at the creek telling them not to do so because it was endangered species habitat. Another sign told them about a program that North Coast County Water District has to give residents recycled water for irrigation purposes.

City Manager Kevin Woodhouse posted a letter at the entrance to the trail on May 5 thanking Mike Mooney for his dedication in beautifying the entrance to the Calera Creek Water Recycling Plant. The letter noted more than 50 gardens where irrigation had been extended without permission and that some gardeners had taken water out of the creek when the pipe was broken. The letter acknowledged the good intentions of the gardeners to beautify the area. The city is in the process of assessing permit requirements to avoid California Coastal Commission enforcement actions, the letter states.

The gardeners were told by Calera Creek Water Recycling Plant Director Louis Sun that 17 of the newer gardens on the far end of the trail past Mooney’s would probably have to go, said Rizzetto.

Rizzetto, who has a horticulture background, tends the Richi and Ethan’s Rainbow Garden, a memorial plot for her son and the household pets who passed away. She said walkers on the trail often thank her for the chance to see something beautiful along the path.

“It is sort of an ironic twist that this area was dedicated to those lost in 9/11 and that incident affected me greatly and still does today,” she said.

Lin Stillman said that what the gardeners have in common is enjoying the outdoors, growing plants and sharing those joys with visitors to the gardens.

“We ask for very little but some water to keep these beautiful gardens alive,” she said. “This is a death sentence to the gardens if this continues.

“It is a strange hostility toward something that is so beautiful and to which so many people had dedicated their time and energy,” she said.

Stillman became involved with her neighbor and friend, Lily Bray, when the pandemic lockdown began last March. They first noticed a garden patch with artichoke plants and roses choked with weeds and they worked it so the plants could thrive. They took on a couple larger projects — weeding the plot dedicated to Mooney’s deceased friend Capt. Dan Minkler, which contains yucca and blue agaves, and another Liberty Garden at the corner of Highway 1 at Vallemar.

“The city hauled away four truckloads of the weeds we pulled, including needing a bulldozer to move the refuse on two occasions,” said Stillman. They successfully replanted all three. Stillman said not all the gardens look so good.

“Adopting a patch filled a space for people with the right intentions but who had little experience in gardening, especially in soil that had never been tilled or conditioned,” she said.

Several gardeners wrote to City Council members on the first day the pipe broke. Council members told Rizzetto they would look into it. That led to the city manager posting a statement at the site.

Bray said she thinks their letters to City Council did the trick to getting the water turned back on. She said she is not afraid of doing the physically hard work necessary to improve the gardens.

“The gardens grew this year due to COVID-19. I love to garden. I love roses. We saw that the garden had been neglected,” she said.

“I’ve enjoyed the garden more now. People put a lot of time into it,” he said.

Mooney said it was “mind-boggling” to him to have the gardens beyond his reviewed to see if they comply with the permit requirements of the California Coastal Commission. He said he’d be curious to see if those regulations restrict planting to native plants only.

Nebraskan arrested in Pacifica after his 2 children found dead

Officers from the Pacifica Police Department on Sunday arrested Adam Price, a 34-year-old Nebraska man in connection with the death of his two children.

Kids as young as 12 years old can now get COVID-19 vaccines throughout San Mateo County after federal and state medical advisers gave the green light this week.

Last week, the Half Moon Bay City Council joined the Pacifica City Council by formally endorsing the Seamless Transit Principles, a set of guidelines for San Francisco and Bay Area transit operators to establish a Highway 1 bus corridor and integrate public transportation across the region.

Historic model train chugs out of storage, toward museum

The model of the historic Ocean Shore Railroad is coming out of storage for a permanent exhibit with the Pacifica Historical Society.

A broken irrigation pipe at Mike Mooney’s Liberty Gardens led to an assessment that the gardens past those original plots will have to go.

Carlos Patel and his family became hosts of Americas Best Value Inn at 2160 Francisco Blvd. in 2007. In a year’s time, they faced the 2008 recession. That is when Patel met Marina Hernandez from the Pacifica Resource Center.

For the first time since the start of the COVID-19 pandemic, San Mateo County has moved to the least restrictive “yellow tier." The new designation now allows expanded capacity and indoor service at bars, restaurants, movie theaters and gyms.

City buildings closed last year due to an infestation of mold and water damage and will soon be rebuilt.

When Sylvie Charles created a GoFundMe campaign to support her family’s hospital during the COVID-19 crisis in India, she had a modest goal of $2,500. Five days later, the fundraiser is at $53,000 — and counting.